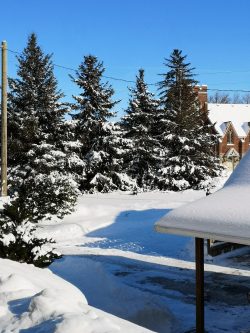 We here in Canada like to complain about the cold temperatures, snow and bad driving conditions. Last year, 2019 was at the extreme end of low temperatures. I just checked the daily data on the Environment Canada website for the months of Jan., Feb. and March.
January, had 6 days where evening temperatures, were near or less then -20C. No need to say that with the wind chill factor, they certainly felt much colder. To think I paired my breeders on the 22nd if January last year, it was a mere -22.3 degrees. Talk about a stubborn, thick headed Dutchman!!

February was a bit warmer. It only had 5 days at these same temperatures, and March came in at a mere, 4 days.

A bit of heat during the critical laying days was provided and after that, they were on their own. The drinkers had warmers under them and the birds were fed twice each day. They were given as much as they would eat in half an hour, after which the left overs were removed.
The cold did not affect hatching percentage, as it was in the high 80% range (I keep track of it). If we want to be realistic about hatching percentages, an average of 85% or higher is more than acceptable.

Compared to last year, 2020 has been mild. The coldest temperature, this year in our area has been a -14C evening temperature and that only once. The pigeons were paired on the 30th of January this year and to this date haven’t had any heat or used the water heaters.

But, winter isn’t over yet, so I will keep my fingers crossed!!!!

Electricity charges for the loft so far are nil. My contribution to a more environmentally friendly pigeon sport.

Other related articles you may want to read,

The hardest thing about pigeon racing. This article was first published in 2003 in Nederland’s […]